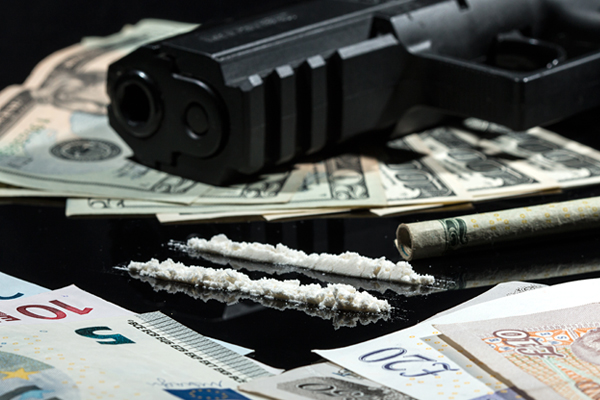 Manufacturing crimes in New Mexico, with methamphetamines occurring in a non-urban inland of New Mexico, are bountiful. A rather complicated word, “manufacturing” is described as the production, preparation, propagation, compounding, cultivation, growing, conversion, or processing of a controlled substance. Most of these substances are actually exacted in a natural way, or by chemical synthesis, or by a combination of each. Manufacturing charges often arise when law enforcement receives a tip that someone is manufacturing or growing a dangerous drug in a residence. Law enforcement then takes comprehensive measures before a bust, doing background review the criminal history of the residence or property has a past history of drug charges, establishing surveillance, and check electricity bills and junk containers for drug paraphernalia. If police believes that there is a potential cause for a warrant, a search warrant is prepared and presented to a judge.

A drug manufacturing crime in New Mexico is extremely severe and are typically charged as a felony which carries prison sentences, steep fines and probation conditions. The manufacturing or cultivation of any amount of marijuana as a first offense holds 9 years imprisonment and $10,000 in fines.

Manufacturing charges are built up to the next level, felony charges, under certain circumstances like distance to academic institutions, churches, public housing, day care establishments, parks, community offices, institutions and even adult nursing homes. On top of that, there are additional charges that are commonly filed in these situations if the property used was owned, leased, rented, or possessed for manufacturing (or cultivating) a dangerous drug. These charges do not only apply on a person renting a house for manufacturing, but also to the owner of the house that knowingly rented it to a person manufacturing a dangerous drug.

Drug manufacturing for specific drugs including methamphetamine and marijuana has become something of an epidemic in New Mexico, and accordingly, law enforcement has stepped up their operation to handle it. They are so aggressive that, in some instances, they don’t follow their own legal procedures in search and seizure or in the procedure of arrests. An experienced drug crime lawyer can help recognize whether the police officer disregarded your civil rights, then demand that the evidence be regarded as inadmissible and the charges dropped completely or reduced once proof has been established.

Being charged with manufacturing crimes in New Mexico is a situation no one wants to be in. To get the protection and defense you need, get in touch with the best drug crime lawyer in New Mexico today.