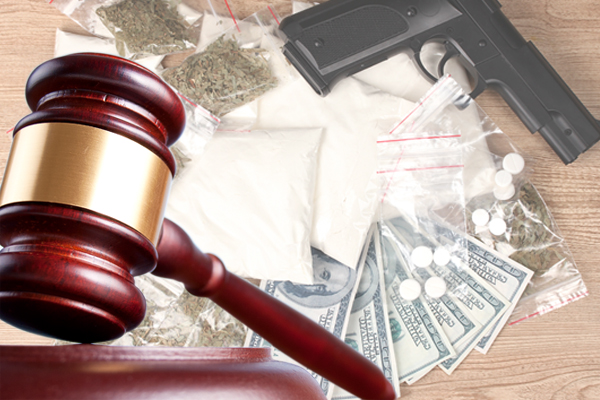 There are drug distribution laws at a federal and a state level and both are very serious, though you’re more likely to face federal drug distribution charges if the alleged event took place on an interstate or involved crossing state lines. More than half of the people imprisoned on federal charges have been found guilty of a crime involving an illegal substance and about half of them receive sentences of ten years or more.

Felony drug distribution is one of the most severe offenses. The government comes down hard on people who are found guilty, in part because they want to keep offenders off the street and stop the circulation of illegal substances, and in part because they want to make an example of offenders to discourage others from taking part in illegal drug distribution. There are three main charges people face in relation to the distribution of a controlled substance.

1. Felony possession of a controlled substance with intent to distribute:

Law enforcement believes you had an illegal substance in your control and that you intended to sell it or pass on to someone else.

Law enforcement believes you have sold or dispersed illegal or controlled substances. Bear in mind, they do not have to have proof of an actual sale. They can surmise based on evidence, such as large amounts of cash or witness testimony that the substance was sold or given to someone else.

“Conspiracy” charges are often a fallback plan for law enforcement and for prosecutors. They may apply them when they cannot prove a drug existed or as part of a package of charges stemming from a single event. A conspiracy charge is issued when they believe two people planned to commit an illegal act and that they took some form of action to bring the act to fruition. A conspiracy to distribute a controlled substance charge could stick on very little evidence. For example, if law enforcement believed two people planned to buy drugs and resell them, and then collected cash from potential buyers to make their own purchase, an allegation of conspiracy may be made.

Whether you are charged with intent to distribute or conspiracy to distribute, you may receive the penalty for distribution of controlled substance. By and large, the government does not care whether someone planned to do the act or actually followed through. All of the charges are felonies, and come with lifelong repercussions, such as the loss of voting privileges and the inability to qualify for some government programs, like SNAP (food stamps) or grants.

Some of the most common drugs, such as heroin, LSD, cocaine, and even Ritalin are considered Schedule I or Schedule II Substances. A first-time offender found guilty of federal drug distribution charges with these substances can get hit with a 20-year sentence and up to $1 million in fines right off the bat. It climbs to 30 years and $2 million for a repeat offender. Depending on the amount of the substance involved, there may also be a mandatory minimum sentence of 5 or 10 years.

There are many strategies an experienced attorney may use to fight felony drug distribution charges. Depending on the circumstances of a case, there may be evidence to prove that the defendant’s civil rights were violated, that evidence was gathered improperly, or that the evidence is inadequate, which could result in the dismissal of all charges. An attorney who is skilled at negotiation may also be able to have the charges reduced based on a defendant’s character or willingness to cooperate with authorities. If you or a loved one is battling felony drug distribution charges, you owe it to yourself to get answers and protect yourself. Reach out to any of the lawyers featured on New Mexico Interstate Drug Lawyer and request your free case evaluation today.